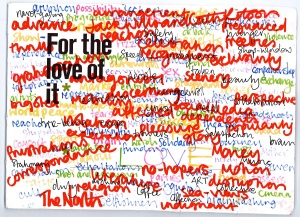 “Exploring the myths, assumptions and expectations of being an artist today”

It is gloriously freeing when you discover that ivory-tower practices are the stuff of fairy tales: all romance and whimsy.  Romantic notions and collective activism however are the stuff of success! Unfortunately, regarding the breakout session held later in the afternoon at ArtQuest’s thought-provoking and trailblazing conference on Wednesday 15th May, entitled “SUCCESS” was not for me owing to my knee-jerk decision that it would be unlikely that such aspiration would be handed to me on a plate – I therefore forego that one. The session I did attend, however changed a bit of my life – it certainly topped up my optimistic bent….

The conference took place at Cecil Sharp House, home of The English Folk Dance and Song Society: friendly, large but not imposing, and with several archival rooms that I sadly happened to only get the odd glimpse of rather than delve.

The day began by driving home a sense of urgency: Professor Lynda Morris was the first speaker and whilst presenting the audience with an recent historical context of the art world and art practice, set an enquiring tone in line with, I would suggest, accounts of The What Next sessions that have been attended recently by Arts Leaders.

Music to my ears – not unexpected coming from Lynda Morris, founder of EASTinternational and Chair of Curation and Art History at Norwich University College of the Arts – was her emphasis on development in the regions including mutual support around the country. In this respect, I’m in on discussing how to champion what we all ready have regionally and work together to raise the bar.

Much of Morris’ critique took pains to blow any delusory bubbles straight out of the picture by talking about the “industrialisation of being an artist” and the “provincialism of conceptualism”.  Morris spoke at length on the Tate offering fertile ground from which to weigh up, let’s face it, often an exclusive world – at least in terms of profitability and the market and the place for regional artists, especially in terms of her incensed interpretation of that institution as an “shop window for mega galleries” in London, which she noted as “the capital of capitalism”. Passions ran high and whilst impartiality wasn’t high on the agenda for Morris she did recognise and detail events that are notable but not without contention, for example, Tate’s forthcoming two-year programme focused on Africa.

Consequently, from very early on in the day we are invited to question what we value and why in terms of the role of the artist and the community with which artists operate, positing rather than solving questions. Value was the motion posed at the first of two breakout sessions I participated in, hosted by Amy Feneck, Neil Cummings and Sophie Hope. The notes I took during this session suggested that participants valued the following:

…and in keeping with combining or merging ideologies as suggested by such a list, Sonia Boyce, last of the key note speakers, envisioned cultural value and arts practice itself by presenting us with a speech entitled The Future is Social. Amongst other things she spoke of politics and activism – in a measured and realistic tone – in terms of cultural activism. She spoke dryly of the unstable position faced by artist educators, the institutional politics such professionals face and the repression of the political in art schools: “…the amnesia works to depoliticize”.

The last speaker in the Kennedy Hall, a perfect space for dancing, but alas not on this occasion, was from the socially and politically engaged charismatic activist Ellie Harrison who introduced her polemic by quoting Lawrence Weiner, 1969:

“If you can’t make art without making a permanent imprint on the physical aspects of the world, then maybe art is not worth making”.

Harrison (bringbackbritishrail.org) posed answers to the statement For the love of it*, suggesting it might be for money, success, peers, curiosity, an attempt to control etc. etc. She spoke of the prolonged economic, social and environmental crisis’s we face, reminding maybe a rather fatigued consciousness that this predicament refers to a turning point, a moment of change. Harrison offered artists the opportunity for insurgent reflection as “problem solvers” speculating that Ideas are “…probably the only thing that can save us”: suggesting that we “think, think, think until we come up with that perfect solution” and posing the question “How to reconcile the careerist mentality….”

With this in mind, and Harrisons musing over how to close gaps by constructing, reconciling even, living and working environments, I come to that little bit of a life changing experience enigmatically broached earlier. The last breakout session I participated in was Collectivity hosted by The Institute for the Art and Practice of Dissent at Home.

I don’t have kids yet, but I work with them in various capacities as well as conscientiously making time to play…as much as possible, so I think I have the right to assert some opinion over thoughtful parenting…. On entry to this session two boys sat at a trestle table in front of the doors we were to walk through. They were tallying as we made our way in. As Dissent at Home began talking about their unique, rather extraordinary, certainly holistic practice and residency programme, they casually entered the two young lads into the group conversation. The boys would often interrupt, we soon learned, their parent’s discussion with the floor. I have, at times been in the company of precocious and boisterous children – I was one I expect. These young people of, I would suggest, 7 and 10 we none of these things: they became an integral and vital and energetic and playful and adventurous, sometimes unobtrusively tangential, part of the discussion, not through any theatricality or by their parents leading them to answer questions – they spoke – out! It was great to see this.

Although by this time, especially when it came to discussion about money, my eyes occasionally glazed and my brain clouded, we learnt that Dissent at Home is a residency programme whereby artists spend time working in this family’s home. What they posed to us was that they would give up their fee for the day at For the love of it* to pay one of us sat in that room according to the terms they used to regulate the residency. We could either individually pitch or work collectively to pitch an idea. Just over half of us voted to work collectively, meaning that Dissent at Home would leave the room to return in half an hour when we would pitch the proposal and the boys would either accept it or decline.

So two phenomenal things happened to me during this session – or at least I was witness to an event that demonstrated What the love of it means* – the first, I’ve mentioned above but the second was working with 30 odd participants on a proposal, which we finished, pitched and was finally accepted. I loved working together. It brought me joy. It has led me to believe that a collective consciousness is possible and that subsequent positive results built on consensus can be reached and implemented.