Recent dialogue has dictated my foraging for words. Conversations, although often icy and a little lethargic in subject matter, fuel my certainty and ambition to voice, nay ponder, a few things. Asked of me “how did The Art Party Conference go?” of late, I can but reply that it was, for me, a beginning: it allowed me to recognise the impact and vigour of combining forces and all importantly, of having a voice and then blaring it. The Art Party was a vibrant event that, as ever in my life, presents itself as a springboard…. I happen to be working on the peripheries of education in various roles. Lamentations regarding the education system prevail, and yet the uncertainty that instigates conversation slowly reveals an optimism unaccounted for. As I understand it there is very little stability for pupils or teachers. The consensus seems to be an dissatisfaction with what is deemed ‘professional’ and an emphasis on over-bureaucratisation. This takes me to the crux of this post…. Earlier this year I read two books following one of the most inspirational performances I had the good fortune to observe and participate in. The performance was Monica Ross’ Acts of Memory. The books were Hannah Arendt’s On Violence and Susan Sontag’s Regarding the Pain of Others. I spoke of Ross’ Acts of Memory a talk I presented for the Women’s Institute which was coincidentally held on the International Day for the Elimination of Violence against Women, November 25th. I will post an edited version of this in due course (when I find where I saved the document, basically). 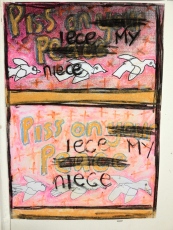 Today gives me the opportunity to quote from these books following the publication of my review for The LSE Review of Books on Wim Wenders and Mary Zournazi’s book Inventing Peace. This book demonstrates the interrelatedness of things, something I continually recognise in my practice. In order to progress at all we must allow for critical solidarity (?) and accountability. I recognise, from reading these books, my insignificance, this is a fact no matter how egocentric I feel (which is frequently), however, I have the ability and platforms and tools for dialogue and plenty of people with which to converse with, with which to try imagining a different shape for the future… “Today we ought to add the latest and perhaps most formidable form of such dominion: bureaucracy or the rule of an intricate system of bureaus in which no men, can be held responsible, and which could be properly called rule by Nobody.” Hannah Arendt, On Violence “Only where there is reason to suspect that conditions could be changed and are not does rage arise.” Hannah Arendt, On Violence “The practce of violence, like all action, changes the world, but the most probable change is to a more violent world.” Hannah Arendt, On Violence “…the greater the bureaucratization of public life, the greater will be the attraction of violence.” Hannah Arendt, On Violence “Because of the enormous effectiveness of teamwork in the sciences, which is perhaps the outstanding American contribution to modern science, we can control the most complicated processes with a precision that makes trips to the moon les dangerous than ordinary weekend excursions; but the allegedly “greatest power on earth” is helpless to end a war, clearly disastrous for all concerned, in one of the earth’s smallest countries. It is as though we have fallen under a fairyland spell which permits us to do the “impossible” on the condition that we lose the capacity of doing the impossible, to achieve fantastically extraordinary feats on the condition of no longer being able to attend properly to our everyday needs”. Hannah Arendt, On Violence “But a war photograph seems inauthentic, even though there is nothing staged about it, when it looks like a still from a movie.” Susan Sontag, Regarding the Pain of Others “It is because a war, any war, doesn’t seem as if it can be stopped that people become less responsive to the horrors. Compassion is an unstable emotion, It needs to be translated into action, or it withers.” Susan Sontag, Regarding the Pain of Others “…news has been converted into entertainment….” Susan Sontag, Regarding the Pain of Others “Perhaps too much value has been assigned to memory, not enough to thinking.” Susan Sontag, Regarding the Pain of Others 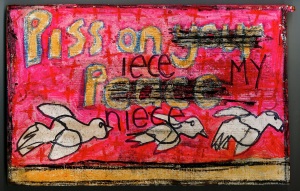 “The cost of war is a major reason for the dire straights our economy is in, leading to cute in the arts and other forms of social funding.

The manufacturing involved in the arms industries is a factor in the damage to the environment….” WAR, WAR AND MORE  in PAMPHLETS, ART?UEST