Place your mat down. Chop up on it. Wipe it clean. Lick it if you must. Move it about. From place to place to place to place. it. there.  And let it stay put if you want to. But do, oh for mercy’s sake, treat it like your best table ware. Its limited edition you know. 1 of 50 get it. No more after that.

I’m gonna sell you an edition, as stated, and not an original. The image to the left, a collage constructed over 5 years ago I think I left in Norwich somewhere. Before that notion of valuing my work was drilled in. The image to the right is taken from a series of self-portraits as described below.

Now, I think what I’m saying is, in a round about way, is that to value the original, we must also value the edition. Theorising about this here is not on the agenda – plenty is written about it and its all very interesting and now, to me, ingrained. I can refer you to books. Explore.

The crux is this: we must value the individual, from whence we derive a collective, that must be loved too. Individuals champion collectives and visa versa. As individuals, we might work towards a collective aim. Here is the humanitarian aspect, linking the place mat with immigration/asylum policies… travesties, barbarism.

Last evening, despite public outcry, @airmauritius ensured the forced deportation of #YashikaBageerathi What more can I say here that isn’t being addressed on Twitter? I feel sullen in my impotence, in a collective impotence.

So I’ve decided to sell off the editioned placemats of Illegal/Alien – I had a lightbulb moment during the night. All the funds from it I pledge to Women for Refuge http://refugeewomen.com/

Each placemat is £5 + £1 postage. You can obviously put more in the kitty to support the work that women for Refuge do.

Still, to buy, not to buy? Whilst you ponder the question. Sign this

We live in a country founded by immigrants. Our country relies on immigration. I believe that the majority of the population draws spiritual, cultural and social values from the collective and embraces individual difference and characteristics that make us unique. I would suggest a minority have, in parallel to one another, disregarded priceless values with an entrenched emphasis placed on consuming products. This greed is top heavy. The Protestant work ethic that Thatcher expounded has met its match with my generation and after. These conundrums affect us all and in an attempt to diffuse a paranoid, anxious and panicked society we must ignore them at our peril. It is our duty and responsibility to collectively appreciate and seize
values that were previously upheld: the economy, living, health, education, working, transport and family standards must raise alongside the next generation as they blossom.

Illegal/Alien presents signifiers of popularised identity observed within British culture and society. The collage to the left of the print pays tribute to a story my mum tells about a guy on the tube who wore a lampshade for a hat. The collage also shows me as I was at about 15. The self-portrait on the right was taken in response to comments I had read on social media sites about the riots in London 2010 and immigrants over-crowding this country – I think I wrote on my body something along the lines of “we are all immigrants on this island of shopkeepers”.

Appearances may reveal but simultaneously mask identity, leading to assumptions. The But Where Are You? series is taken from an conversation…i’ll tell you who with on another occasion. I am exploring the conversation through repeated text, paralleling the insistence when spoken, as indicative of remnant British Imperialist thought and its subsequent associations with dislocation, segregation and integration. The text can be interpreted as a chat-up-line, a genuine enquiry or a statement of assumed fact. 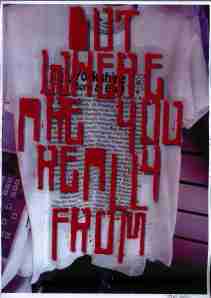 Bonnie Greer in a talk entitled “Identity and Its Discontents” (available on YouTube) mentions the dichotomous disturbance aroused between being at home and being a foreigner. She observes that identity is rooted in freedom.