“This small non-time space in the very heart of time, unlike the world and the culture into which we are born, can only be indicated, but cannot be inherited and handed down from the past; each new generation, indeed every new human being as he inserts himself between an infinite past and an infinite future, must discover and ploddingly pave it anew.” Hannah Arendt, Between Past and Future.

September 2013 saw my studioresidency at Crescent Arts culminating in an exhibition entitled Market Prices. The work  is currently housed at HOARD, Leeds.

Market Prices places archiving at its core, comprising sculptural installation and photographic documentation of objects compiled in an accompanying catalogue. Its expansion saw the installation become a stage-like repository within which I presented sculptural objects, performance, allowing for the development of text, generating from the inventory, and as sculpture. Now, the boxes are dispersed/jettisoned like flotsam. Rather than being stacked, as was the formation at Crescent Arts, where the nature of the exhibition space allowed for a claustrophobic installation – a wall, three teetering, towering pillars and a sculpture that resembled a tank, allowing audience only a peek, to their frustration, at the corners of objects – the space at HOARD demands a reading of the contained objects, with each box emphasising limitations.

I was reminded of all of this during my first week at Islington Mill where I now have a studio. My arrival on  Monday was marked by a conversation with Jen Wu whose The Wall  examines custodianship and interconnectedness. I quote, on The Wall:

“It has the potential to be a site where people can once again come together – to retain the legacy of a collectively built past, and together create a monument for posterity and the future.”

By Thursday I was working the bar for The Mill who have supported Quarantine’s ambitious, truly contagious in its joy, humility and fun, production, SUMMER. This is theatre that fills to bursting point in its offering of the everyday, has at it’s heart my Grandmother’s adage “life isn’t a rehearsal” and, like many beautiful, energetic, ceremonious, rebellious invitations to experience life as art (as with The Wall), to become emancipated spectators, harks back to Marc Camille Chaimowicz’ Celebration? Realife. Pertinent to Market Prices was a scene in SUMMER where the participants empty out items from IKEA bags, cardboard boxes and suitcases on to the vast stage of the warehouse where the production was held. The objects were arbitrary, and yet each resonated and punctured the soul allowing perfectly formed memory bubbles to emanate. The performers categorised the objects right in front of us – they essentially performed the Market Prices Catalogue. They also put themselves into categories, which I found unnerving.

“People, art, life cannot be made/exist in a vacuum – yet most art seems unrelated to people.” Chaimowicz

Market Prices is an exploration of objects littered with links to value in relation to personal narrative and practice. The objects are made up of a lifetime collection, including unique artist books, drawings, paintings, …the gamut of inherited, coveted, or miscellaneous stuff. Each object is neatly housed within its own bespoke box. These codified repositories, akin to drawers, can be stacked, creating a monument to this personal narrative within an art-historical, cultural and socio-political context. The catalogue functions to reveal the objects that are largely masked from view once assembled. The classification system is driven by a personal trajectory and is chalked directly onto each of the approximately 350 boxes, referenced in the catalogue and within the inventory, which aims to detail each item textually. However, there is a remove from obvious personalisation, demanding a narrative excavation, a spatial reading borne of enclosure, disclosure and a discourse allowing for fragmentary and arbitrary evidence.

How might Market Prices merge a personal narrative within larger concerns regarding value, worth, labour and education? And, using Baudrillard’s question in his System of Objects as a prompt “Can man ever use objects to set up a language that is more than a discourse addressed to himself?” 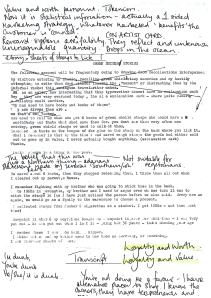 I had no desire to stick them down in the allocated books, although i remember too of their existence stuffed in the ashtray. I wasn’t bothered about collecting the stamps really I just desired the stuff that could be mine if I was committed to the cause. I really wanted the quick fix – quicker than saving would allow. I wanted to handle the actual value; I could only imagine the object from the catalogue. I wanted to handle the value through an object that I could imagine as of approximate worth. I was worthy of the value – the amount of tokens such an such an object was priced at, or so I think I thought.

Jade: Er because that will keep them dry somewhere if they are going to go dry. You know I like to keep them, dry, well, exactly dry, er then get to building but it shouldn’t take long getting to lifting them all.Dan: Is there any specific reason why you’ve chosen wood or?Jade: Erm well it’s because I, I was given the material as erm remnants that were otherwise going to be used for kindling and erm it had been in my studio for easy transportation or it’s a a a receptacle that is easily identifiable, it’s got a a uh big history surrounding and er individually extracts meaning from it all, it’s it’s something thatDan: it’s yeah yeahJade: but I chose the wood because it was there, I was given itDan: it was there yeah yeah. Then what was your sort of initial stimulus for this project?

Jade: erm yes it is because it’s now evolved in as much as erm I’ve used er images that I had that weren’t multiples but were part of a project called ‘paranoia paradise’ which was taken from erm Derek Jarmens erm film ‘Jubilee’ which was erm really important to me when I was doing my MA. So those were images of erm mass media and a sort of bombardment of images and that’s where this embedding in paper comes in, so I created a erm a receptacle again made out of er made out of latex, really thick latex but it almost looks like skin so they’ve they’ve stored, so now I’ve made this other object I need somewhere to store the object so it almost becomes storage, its archive but because my step dad was, and still is, he’s still a solicitor but no longer my step dad

Jade: but erm he had index boxes that now house my postcards in alphabetical order but at the time I would index all the books that were in the house and then would persuade my mum and Joe to borrow them and then I would keep the logs so I could charge them both for overdue items and

Jade: so they had a library card you know and every book had a sticker and I had made my own sort of archiving system for the books and some of them still have it, I should take some pictures of it, and also erm what was I thinking about, so there’s also a series of works ‘misunderstood dedication’ which came out of paper that I had made from burnt work, work that I wasn’t erm using because I had got frustrated with the role or art or artists and I was frustrated because I was stuck in the middle of nowhere and with a lot of objects that erm.

Day one as far back as it goes some of my drawings as a child my mum has in an archive because it just happened that she was doing her teacher training and was able to use me as a model for her teacher training with the drawing. So, that was already archived so I’ve, and there were images that I’d made that I just felt I’ve already got them as digital files I don’t need to be carrying around the paper

Jade: and also I was disillusioned and kinda angry, so I burnt these works erm and have repurposed the ash the chuck the charcoal, cough, excuse me, and made them into books and fragments that are sketched, and from that I’ve also been able to get prints from the carbon, erm so that was all in the ‘misunderstood dedication’. So that’s archived in market prices, and I think the link between the material used there and the titles of ‘market prices’ is kind of self explanatory maybe but.

Art history, libraries, books erm its exhaustive we kind of look for compendiums to describe all manner of things that relate to our lives.

Dan: So this is creating your own kind of compendium with things which have

Dan: which relate to you?

Jade: Yeah I would say that its not all totally personal but erm returning back to the material now I’ve got a material that meant that I could, sorry. So initially the material was all that I had, now the material itself comments, it’s a processed material whereas before I was thinking more about the shed and what they were going to be used for but now I’ve been able to, because I’ve been commissioned to do this for Crescent Arts it lends itself not to look at the sheds where the offcuts, where the material was coming from but to look at this material in terms of this processing of material so it’s not it’s a man made material in as much as it to use what’s there to make something else normally to make fences or to make sheds and it’s bought in but in a way I don’t think it’s totally individual because erm just the people you meet, so the guy delivering the material in that short space of time, into relationships between human beings and human beings on the objects, human beings in sculpture, human beings in space, as well as this object that I hope defies definition just like individuals

Dan: yeah yeah, so it stands on its own merits in a way

Jade: so the objects that are collected and archived stand on their own but there are links that can be made through everything, through everything, all the time and I think even if the sculpture wasn’t there and you were left with the publication then that again it stands on its own merit but its about these interrelationships and thinking about it in a bigger picture outside of the sculpture, outside of Crescent Arts.

“An endless task, the cataloguing of reality. We accumulate facts, we discuss them, but with every line that is written, with every statement that is made, one has the feeling of incompleteness.”

“Sometimes I’d start thinking about my room and, in my imagination, I’d set off from one corner and walk round making a mental note of everything I saw on the way. At first it didn’t take very long. But every time I did, it took a bit longer. Because I’d remember every piece of furniture, and on every piece of furniture, every object and, on every object, every detail, every mark, crack or chip, and then even the colour or the grain of the wood. At the same time, I’d try not to lose track of my inventory, to enumerate everything. So that, by the end of a few weeks, I could spend hours doing nothing but listing the things in my room. And the more I thought about it the more things I dug out of my memory that I hadn’t noticed before or that I’d forgotten about. I realized then that a man who’d only lived for a day could easily live for a hundred years in a prison. He’d have enough memories not to get bored. In a way, that was a good thing”